Skip to Main Content
It looks like you're using Internet Explorer 11 or older. This website works best with modern browsers such as the latest versions of Chrome, Firefox, Safari, and Edge. If you continue with this browser, you may see unexpected results.

Choose an eAudiobook by clicking "Listen to audio." This will take you to the item in EBSCOhost.

If no "Borrow" button appears, the eAudiobook is checked out to another patron.

Next, choose how long you need the eAudiobook. No other patron can access while it is checked out to you. 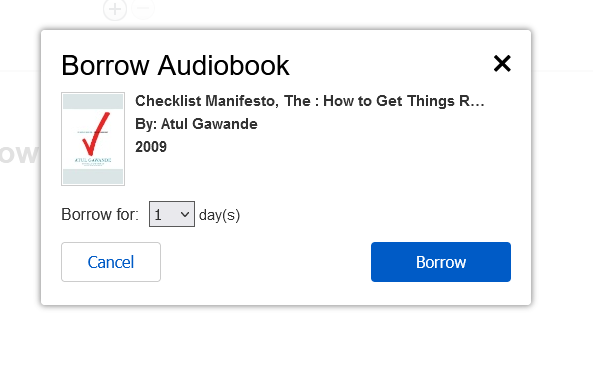 You can now access the eAudiobook with the EBSCO Audiobook App. 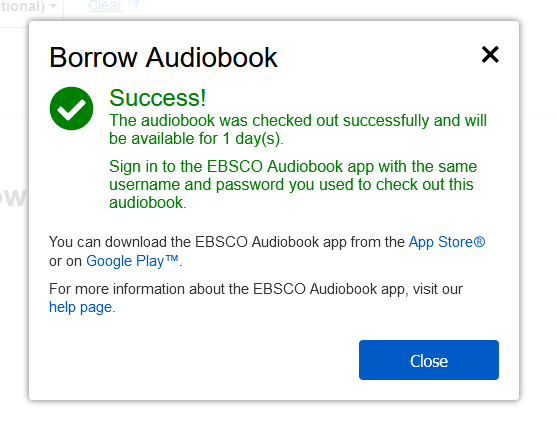 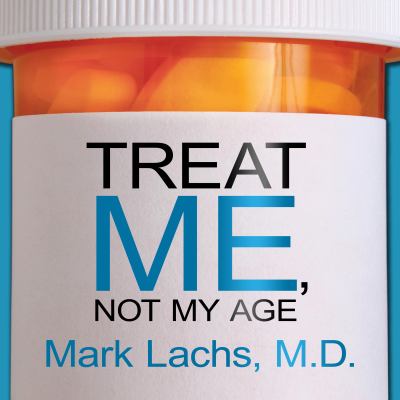 Treat Me, Not My Age

We're all getting older, all the time, but too often our culture defines the aging process negatively instead of embracing it as a natural part of life. Nowhere is this problem more pronounced than in our health care system, where ageist medicine often serves to worsen our medical issues instead of helping us figure out how to address or avoid them. Whether we're forty or eighty, what we need is an insider's guide to staying healthy, including choosing the right doctor, learning to play a role in managing our own care, and figuring out how to plan financially for our own future or a parent's.In this book, renowned geriatrician Mark Lachs takes listeners on a grand tour of adult medicine, showing how we can navigate a complex and confusing system so as to make the best choices for ourselves and our loved ones. With gentle humor and great wisdom, Lachs explains how being proactive and making smart decisions about health care can lay the groundwork for a satisfying, active lifestyle that lasts well into the golden years. You'll find out:-How to identify a great primary care doctor, specialist, or care facility-Why the hospital is no place for sick people-How to make home improvements that will keep the nursing home at bay-Why small life changes in your forties can lead to extra decades of good health later on

The Immortal Life of Henrietta Lacks

Now a major motion picture from HBO® starring Oprah Winfrey and Rose Byrne.Her name was Henrietta Lacks, but scientists know her as HeLa. She was a poor Southern tobacco farmer who worked the same land as her slave ancestors, yet her cells-taken without her knowledge-became one of the most important tools in medicine. The first'immortal'human cells grown in culture, they are still alive today, though she has been dead for more than sixty years. If you could pile all HeLa cells ever grown onto a scale, they'd weigh more than 50 million metric tons-as much as a hundred Empire State Buildings. HeLa cells were vital for developing the polio vaccine; uncovered secrets of cancer, viruses, and the atom bomb's effects; helped lead to important advances like in vitro fertilization, cloning, and gene mapping; and have been bought and sold by the billions.Yet Henrietta Lacks remains virtually unknown, buried in an unmarked grave.Now Rebecca Skloot takes us on an extraordinary journey, from the'colored'ward of Johns Hopkins Hospital in the 1950s to stark white laboratories with freezers full of HeLa cells; from Henrietta's small, dying hometown of Clover, Virginia-a land of wooden slave quarters, faith healings, and voodoo-to East Baltimore today, where her children and grandchildren live and struggle with the legacy of her cells.Henrietta's family did not learn of her'immortality'until more than twenty years after her death, when scientists investigating HeLa began using her husband and children in research without informed consent. And though the cells had launched a multimillion-dollar industry that sells human biological materials, her family never saw any of the profits. As Rebecca Skloot so brilliantly shows, the story of the Lacks family-past and present-is inextricably connected to the dark history of experimentation on African Americans, the birth of bioethics, and the legal battles over whether we control the stuff we are made of.Over the decade it took to uncover this story, Rebecca became enmeshed in the lives of the Lacks family-especially Henrietta's daughter Deborah, who was devastated to learn about her mother's cells. She was consumed with questions: Had scientists cloned her mother? Did it hurt her when researchers infected her cells with viruses and shot them into space? What happened to her sister, Elsie, who died in a mental institution at the age of fifteen? And if her mother was so important to medicine, why couldn't her children afford health insurance?Intimate in feeling, astonishing in scope, and impossible to put down, The Immortal Life of Henrietta Lacks captures the beauty and drama of scientific discovery, as well as its human consequences. 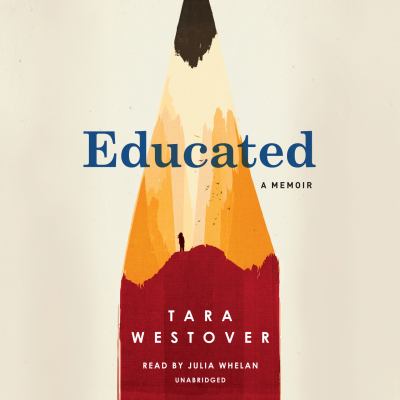 #1 NEW YORK TIMES, WALL STREET JOURNAL, AND BOSTON GLOBE BESTSELLER * One of the most acclaimed books of our time: an unforgettable memoir about a young woman who, kept out of school, leaves her survivalist family and goes on to earn a PhD from Cambridge University   "An amazing story, and truly inspiring. It's even better than you've heard."--Bill Gates   NAMED ONE OF THE TEN BEST BOOKS OF THE YEAR BY THE NEW YORK TIMES BOOK REVIEW * ONE OF PRESIDENT BARACK OBAMA'S FAVORITE BOOKS OF THE YEAR * BILL GATES'S HOLIDAY READING LIST * FINALIST: National Book Critics Circle's Award In Autobiography and John Leonard Prize For Best First Book * PEN/Jean Stein Book Award * Los Angeles Times Book Prize   Born to survivalists in the mountains of Idaho, Tara Westover was seventeen the first time she set foot in a classroom. Her family was so isolated from mainstream society that there was no one to ensure the children received an education, and no one to intervene when one of Tara's older brothers became violent. When another brother got himself into college, Tara decided to try a new kind of life. Her quest for knowledge transformed her, taking her over oceans and across continents, to Harvard and to Cambridge University. Only then would she wonder if she'd traveled too far, if there was still a way home.   "Beautiful and propulsive . . . Despite the singularity of [Westover's] childhood, the questions her book poses are universal: How much of ourselves should we give to those we love? And how much must we betray them to grow up?"--Vogue NAMED ONE OF THE BEST BOOKS OF THE YEAR BY The Washington Post * O: The Oprah Magazine * Time * NPR * Good Morning America * San Francisco Chronicle * The Guardian * The Economist * Financial Times * Newsday * New York Post * theSkimm * Refinery29 * Bloomberg * Self * Real Simple * Town & Country * Bustle * Paste * Publishers Weekly * Library Journal * LibraryReads * BookRiot * Pamela Paul, KQED * New York Public Library 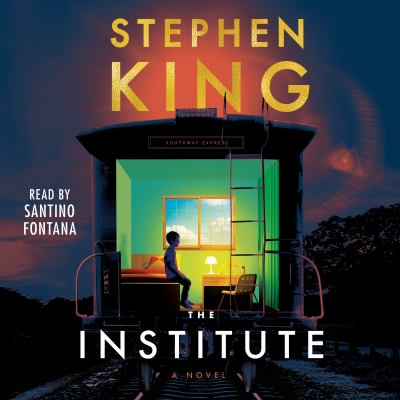 From #1 New York Times bestselling author Stephen King, the most riveting and unforgettable story of kids confronting evil since It. In the middle of the night, in a house on a quiet street in suburban Minneapolis, intruders silently murder Luke Ellis's parents and load him into a black SUV. The operation takes less than two minutes. Luke will wake up at The Institute, in a room that looks just like his own, except there's no window. And outside his door are other doors, behind which are other kids with special talents--telekinesis and telepathy--who got to this place the same way Luke did: Kalisha, Nick, George, Iris, and ten-year-old Avery Dixon. They are all in Front Half. Others, Luke learns, graduated to Back Half, "like the roach motel," Kalisha says. "You check in, but you don't check out." In this most sinister of institutions, the director, Mrs. Sigsby, and her staff are ruthlessly dedicated to extracting from these children the force of their extranormal gifts. There are no scruples here. If you go along, you get tokens for the vending machines. If you don't, punishment is brutal. As each new victim disappears to Back Half, Luke becomes more and more desperate to get out and get help. But no one has ever escaped from the Institute. As psychically terrifying as Firestarter, and with the spectacular kid power of It, The Institute is Stephen King's gut-wrenchingly dramatic story of good vs. evil in a world where the good guys don't always win.